The PEARL model (Pesticide Emission Assessment at Regional and Local scales) describes the fate of pesticides in the plant-soil system and it is coupled to the hydrological model SWAP (Soil Water Atmosphere Plant). Meteorological data on an hourly or daily basis are needed. Soil water flow is calculated using established methods. Different groundwater regimes, irrigation methods and various drainage pathways to water courses can be simulated by SWAP.

Soil water flow is described with the SWAP model. SWAP (Soil, Water, Atmosphere and Plant) simulates vertical transport of water and heat in unsaturated/saturated soils. The model is designed to simulate flow and transport processes at field scale level, during growing seasons and for long term time series. Water flow in soil is described by Richard’s equation including a range of possible lower boundary conditions (for instance groundwater levels that fluctuate in response to the rainfall input). Soil evaporation and plant transpiration is calculated via multiplying a reference evapotranspiration rate with soil and crop factors. In the context of PEARL, crop growth is usually simulated with a simple growth model that assumes a fixed length of the growing season.  In this growth model, both the leaf area index and the rooting depth are a function of the development stage of the crop. However, the generic crop growth module WOFOST is incorporated as well in SWAP and can be used simulate leaf photosynthesis and crop growth. Heat flow in soil is described with Fourier’s law. The thermal properties are a function of porosity and water content and are therefore a function of time and soil depth.  The macropore module in SWAP includes infiltration into macropores at the soil surface, rapid transport in macropores to deeper layers, lateral infiltration into and exfiltration out of the soil matrix, water storage in macropores, and rapid drainage to drainage systems. The macropores are divided in a main bypass domain (network of continuous, horizontal interconnected macropores) and an internal catchment domain (discontinuous macropores ending at different depths). The internal catchment domain causes infiltration of macropore water at different, relatively shallow depth. In addition, the macropores are divided in static and dynamic volumes. The dynamic volumes depend on shrinkage characteristics. 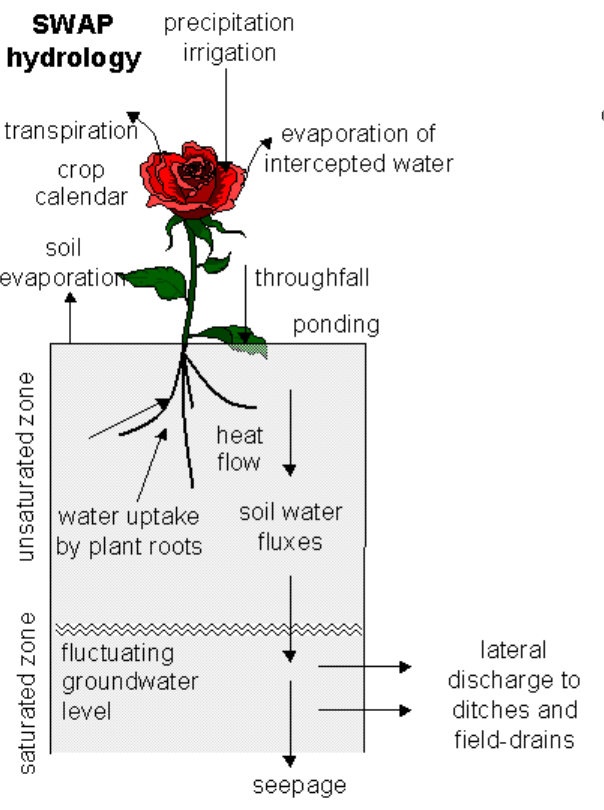 Fate and behaviour of substances

PEARL is based on: (i) the convection/dispersion equation including diffusion in the gas phase with a temperature dependent Henry coefficient, (ii) a two-site Freundlich sorption model (one equilibrium site and one kinetic site), (iii) a transformation rate that depends on water content, temperature and depth in soil, (iv) a passive plant uptake rate. The model includes formation and behaviour of transformation products and describes also lateral pesticide discharge to drains. PEARL can simulate preferential flow. Volatilisation from the soil surface is calculated assuming a laminar air layer at the soil surface. PEARL uses an explicit finite difference scheme that excludes numerical dispersion (the dispersion length was set to 5 cm). Below some more detailed information on the different processes simulated by PEARL is given. 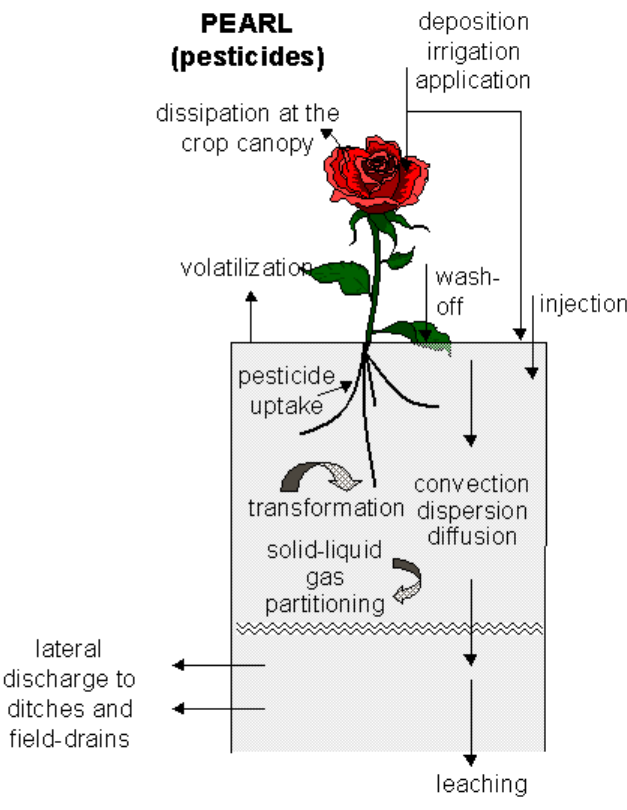 In the current model version, different model concepts of volatilisation have been implemented. A simple approach is based on the diffusion of vapour through the soil and a laminar air-boundary layer (cf. Jury et al., 1990). A more advanced concept is based on the concept of a resistance to transport of pesticide from the surface into the atmosphere (Wang et al., 1997; Asman, 1998). As the volatilisation from soil depends on the moisture condition at the soil surface, the effect of increased sorption to the soil particles under dry soil conditions has been implemented into the model.

PEARL considers a three phase system. The sorption of pesticide on the solid phase is described with a Freundlich-type equation. In the most common approach, the Freundlich coefficient is calculated on the basis of the coefficient of equilibrium sorption on organic matter, Kom. PEARL contains an option of pH dependent sorption. If this option is used, the dissociation constant, pKa, must be specified. The partitioning of the pesticide between the gas phase and the liquid phase is described by Henry's law. Pesticide sorption to the non-equilibrium phase is described by a first-order rate equation. This equation requires a desorption rate coefficient.

The model requires accurate estimates of non-equilibrium sorption parameters. Estimates of these parameters can be obtained with inverse modelling techniques and using long-term sorption experiments. For this purpose the PEARLNEQ software is developed. PEARLNEQ contains the same two-site model as implemented in the PEARL model.

The transport of PPPs in macroporous soils is described for the soil matrix and two preferential flow domains, i.e. a bypass domain and an internal catchment domain (Kroes et al. 2008). Macropores can be either permanent or temporary (due to shrinking of soils).

In SWAP, macropore geometry is described on the basis of three properties, i.e. continuity, persistency and macropore shape. The main bypass flow domain is a network of continuous, horizontally interconnected macropores. These macropores penetrate deep into the soil profile and are assumed to be horizontally interconnected. In the main bypass domain, water is transported fast and deep into the soil profile, bypassing the soil matrix. This may lead to rapid drainage towards drainpipes and short-circuiting between the soil surface and the groundwater. The internal catchment domain consists of discontinuous, non-interconnected macropores ending at different depths in the profile. In this domain, water is captured at the bottom of individual macropores, resulting in forced infiltration of macropore water into the soil matrix. 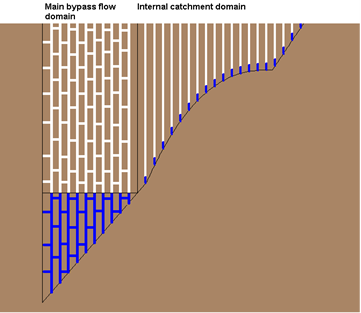