TOXSWA can predict concentrations of pesticides that may enter the water by spray drift, atmospheric deposition, surface runoff, drainage or leaching through the soil as shown on the right.

The model considers the processes of transport, transformation, sorption and volatilisation of pesticides. The water layer contains suspended solids and aquatic macrophytes. The sediment layer is characterised by porosity, organic matter content and bulk density, that vary with depth. Sedimentation and resuspension of supended solids are not considered. 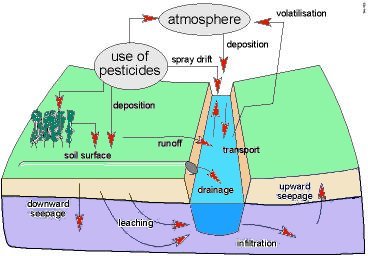 In the water layer, pesticides are transported by advection and dispersion. In the sediment, diffusion is included as well. Transformation depends on temperature. The transformation rate covers the combined effects of hydrolysis, photolysis and biodegradation. Sorption to suspended solids and to sediment is described using the non-linear Freundlich equation. Sorption to macrophytes is described using a linear isotherm. Pesticides are transported across the water-sediment interface by upward or downward seepage and by diffusion. TOXSWA uses an explicit finite difference scheme to solve the water balance equations and a generalised explicit difference scheme to solve the mass balances for the water and sediment layers. The temporal resolution varies from about one hour to one day. The watercourse length may vary from about 100 to 2000 m and the sediment layer is about 10 cm thick. 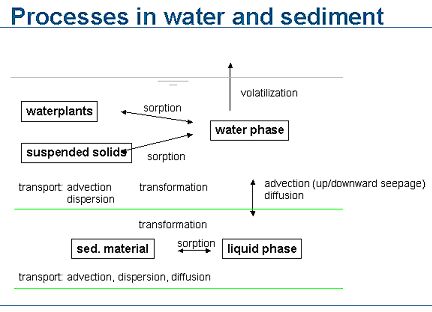 The source codes of TOXSWA v1.2, of FOCUS_TOXSWA 2.2.1 and of FOCUS_TOXSWA 4.4.3 were tested with analytical solutions, the water layer with a pulse in horizontal direction and in time, and the sediment with a pulse in vertical direction and in time (e.g. Section 7.3.4 in Adriaanse, 1996). In a sensitivity analysis of the constant flow version of TOXSWA (v.1.2), water depth, bottom width of the ditch and sorption coefficients for sorption to macrophytes and suspended solids were identified as sensitive parameters with respect to the acute exposure concentration (Westein et al., 1998). TOXSWA v1.2 was shown to give good simulations of time series of chloride, isoproturon and diuron at two points along the two ditches in the La Jaillière catchment (CEH, 2003). For a ditch experiment the sorption of pesticides to the bed sediments (dead leaves) was not simulated well by FOCUS_TOXSWA 1.1.1, which resulted in an underestimation of the loss by this route (CEH, 2003). Ashauer and Brown (2007) compared main characteristics of concentrations of pesticides in drain flow, stream flow and two UK rivers with FOCUS surface water simulations (including FOCUS_TOXSWA 2.2.1 simulations). They conclude that exposure to pesticides is normally pulsed and/or time-varying and that the FOCUS surface water scenarios are able to reproduce the overall characteristics of this type of exposure.